The rattan shield (téng pái 藤牌) was used in China by both armies and militias since the time of the Míng 明 dynasty, especially in the south of the country, where the plant from which the material is extracted grows. 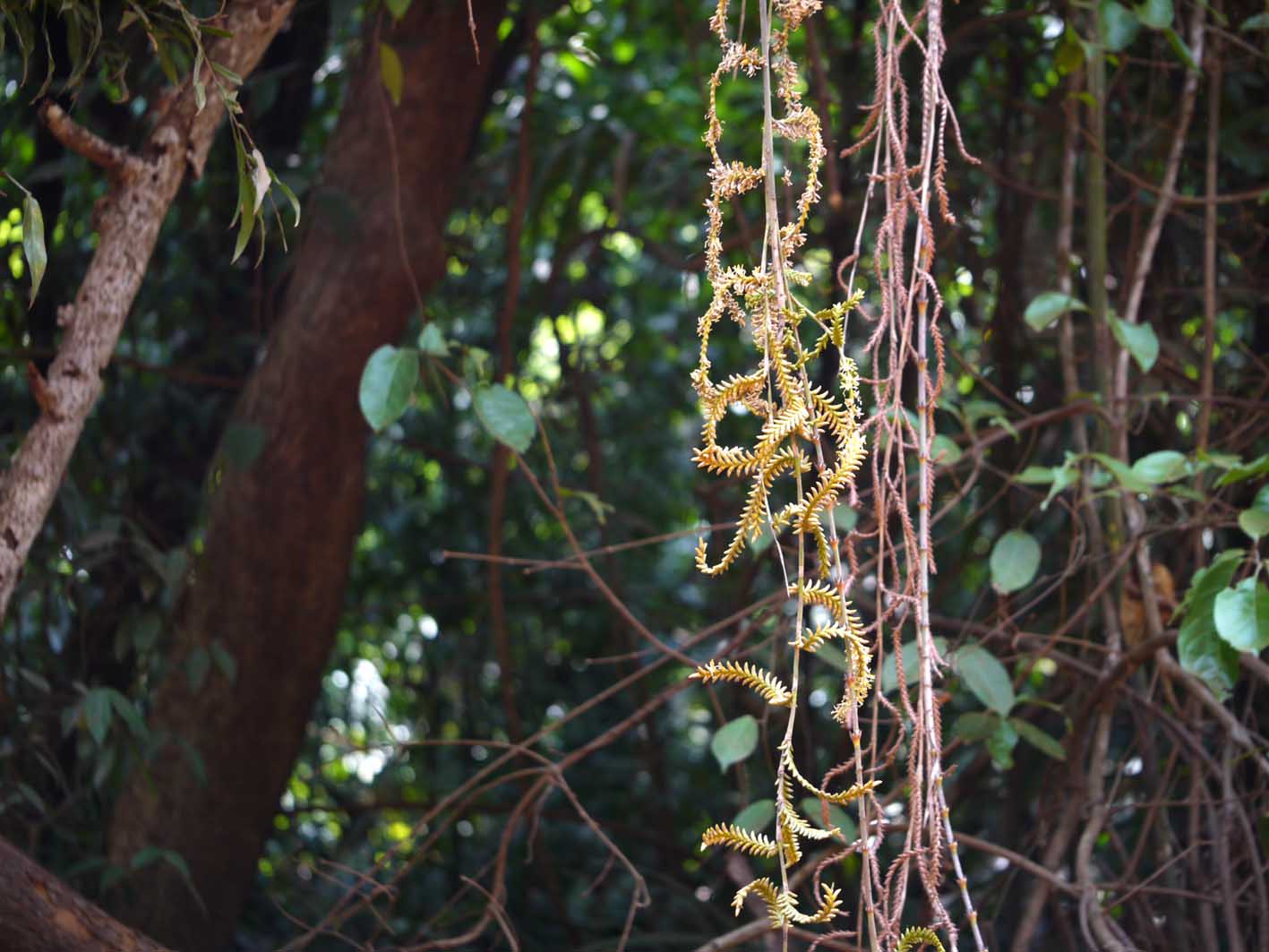 One of the rattan species.

Rattan is a climbing palm tree with a very elastic ligneous part, similar to wicker, used in the manufacture of numerous tools for everyday use. Due to its elasticity, rattan absorbs shocks well and because, unlike wood, has no grain, it does not break easily; therefore it was also used for the manufacture of shields.

In the military sphere, these shields were used by vanguard soldiers armed with one-handed sabres, who served as a line of protection for the lancer lines behind them.

During the Qīng 清 dynasty, from Manchu origin, a nomadic people fighting on horseback, and with the increasing availability of firearms, shields were relegated from the military sphere, but continued to be used by civilian militias, bandits and martial artists until the 19th century. In fact, at the time of the anti-Manchu revolutions in southern China, rattan shields were very popular due to the ease of acquisition of the material and the low cost of its production. 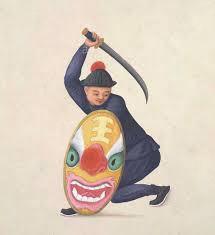 Illustration of a soldier with sabre and rattan shield.

The shield basically consists of a long strip of core, coiled into a spiral, and intertwined with several strips of rattan skin that serve to hold it, to which is then added a ring to insert the arm and a wooden handle fixed to the core with rattan skin.

After giving the shield its shape, it was impregnated with tung (tóng 桐) oil, to give it greater robustness and protect it from the humidity of the climate. Finally, the téng pái used to be decorated with some paint on their outer surface. The decorative motif par excellence was a tiger's head, possibly due to the superstitious association between the word tiger, hǔ 虎, and the word protect, hù 護.

The old téng pái could reach up to one meter in diameter, or even more, and had a pointed shape in the center, similar to a cone. Subsequently, in the Qīng dynasty, when they ceased to be used in the army, they acquired a flatter form, due to the greater ease and speed of manufacture it entailed. One of these flattened shields about 75 centimeters in diameter requires approximately 60 meters of rattan core for its manufacture, this amount being even greater for the case of the old cone-shaped téng pái. 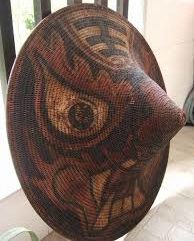 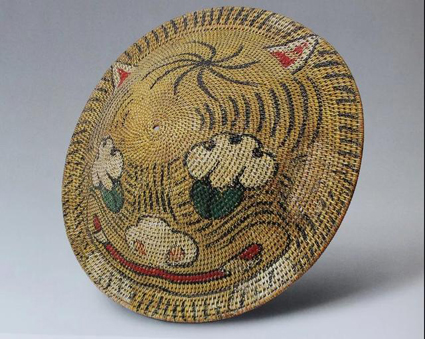 Two rattan shields decorated with tiger head drawings.
The one above, older, conical in shape. The one below, in its modern shape, flatter.

Replicas of rattan shields currently manufactured for martial arts practice are somewhat inaccurate and of lower quality, as rattan skin used to intertwine and hold the core is narrower and does not cover the entire surface of the shield, so today's téng pái are less compact and sturdy. 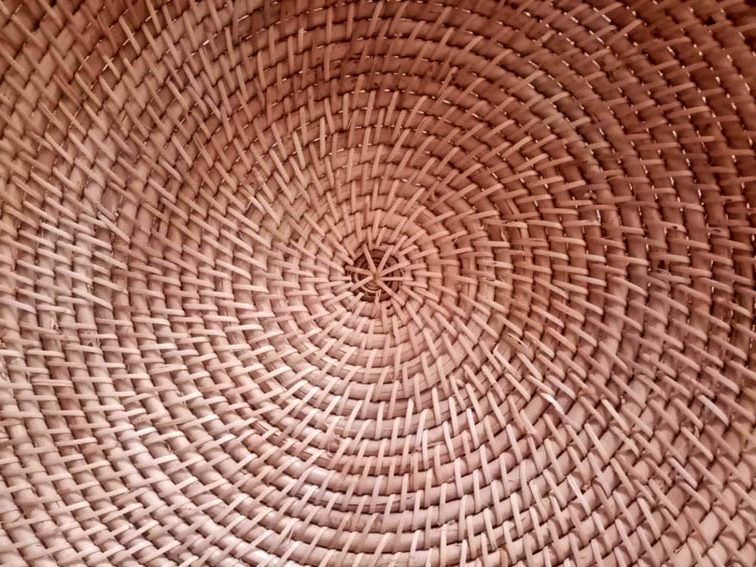 Braid of a modern téng pái. The thicker spiral is the rattan core. The rattan skin, which intertwines and holds the spiral, does not completely cover the surface of the shield, unlike on the older shields, more compact. 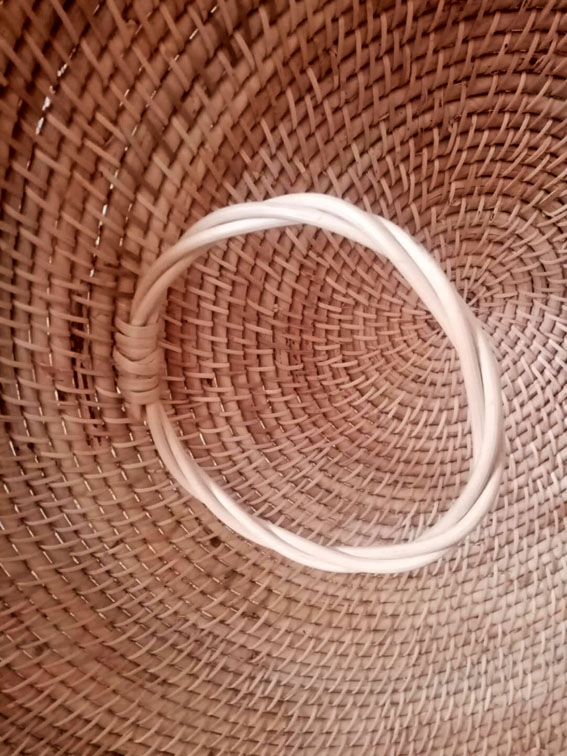 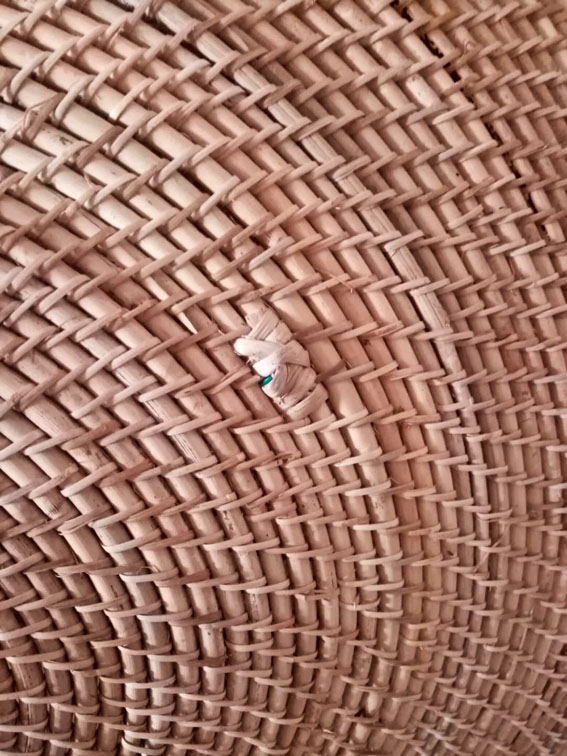 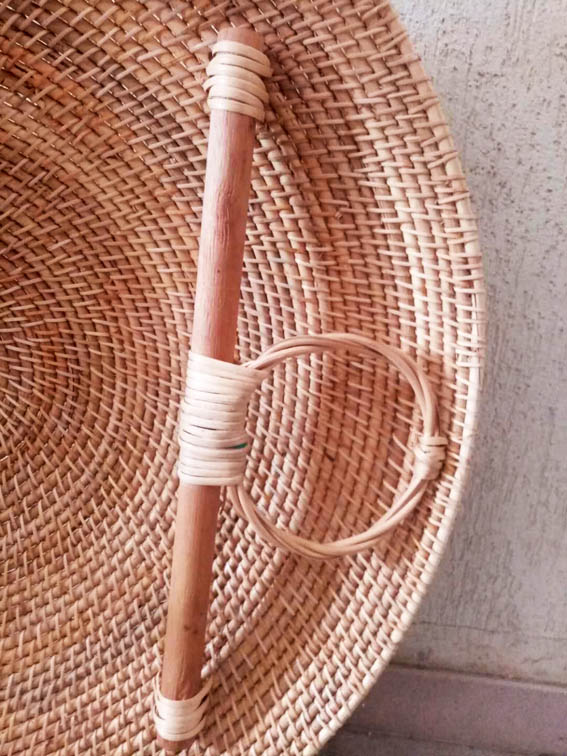 In modern shields, both the arm ring and the shield handle are not woven directly with the core, but attached to it with rattan skin. 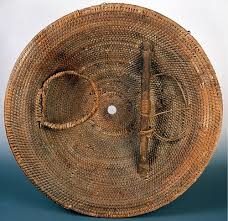 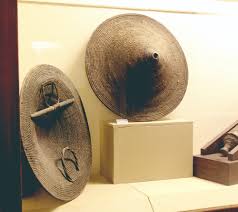 In these images of old shields it is observed that the arm ring and handle are held directly to the core, which makes the shield more resistant.

The most commonly used weapon together with the téng pái is the short single-edged sabre (dāo 刀). In the south, especially among militias and martial artists, it was very common to use the butterfly knife or húdiédāo 蝴蝶刀 (in Cantonese, wu dip dou), the favourite weapon of many Southerners. Using a short knife like this had the advantage of being able to hide it behind the shield, so that the enemy could not see where the next attack was coming from.

Unlike other shields, the irregular surface of the téng pái often meant that the weapons of enemy soldiers were stuck on it, creating opportunities for attack. The most characteristic movement of this shield is a kind of semicircle with which the bearer can deflect the enemy weapon outwards, while lashing out with the knife.

On the other hand, martial practice with the téng pái stands out for using low stances and footwork, so that the body is protected as much as possible by the shield. In the face of low strikes to the legs, it is more effective to lower the stance of the entire body than only the position of the hand holding the shield, so as not to unprotect the top. From this position, the enemy can be attacked with the knife both from above and below the shield. Similarly, in the old military strategy with the téng pái, these low stances facilitated the attack of the soldiers who came behind armed with long weapons, above the shoulders of the shield bearers. 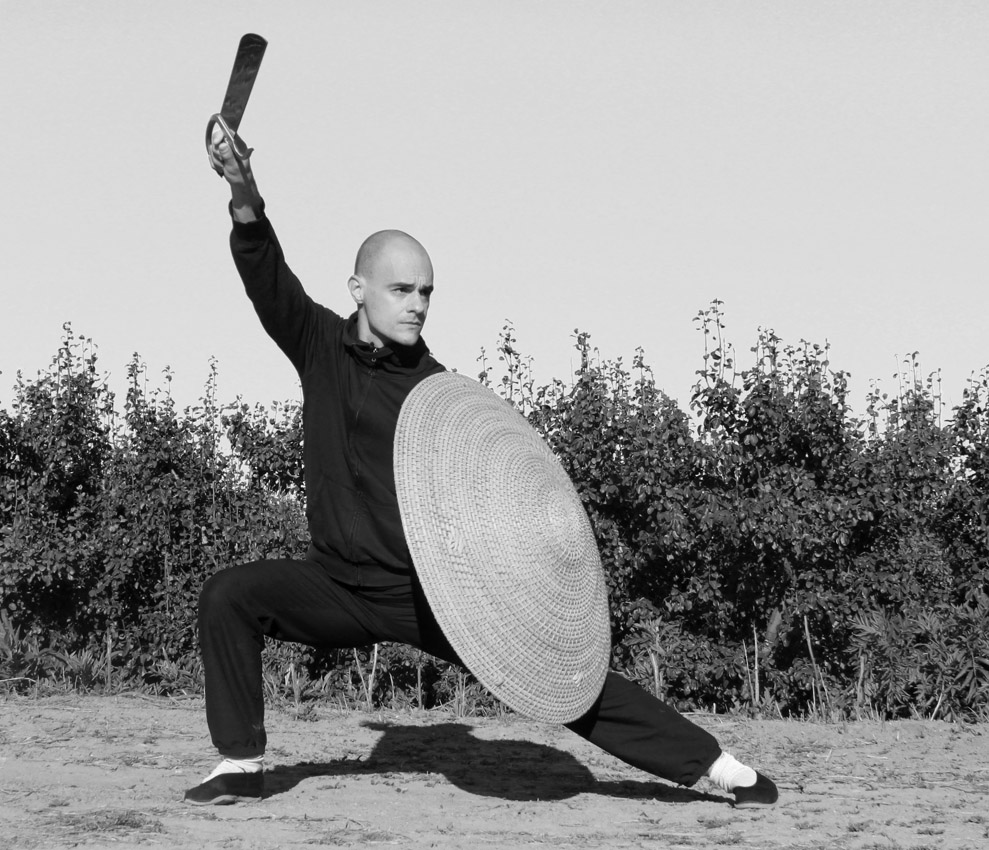 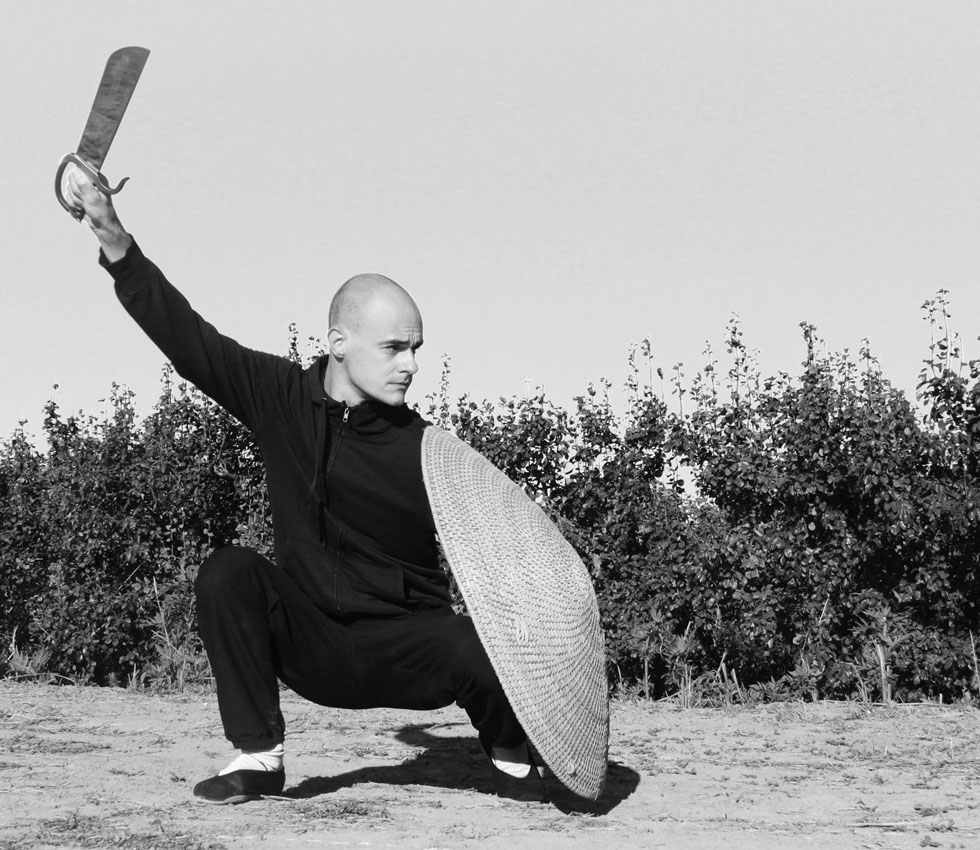 The martial use of téng pái prioritizes low positions to protect as much body as possible. 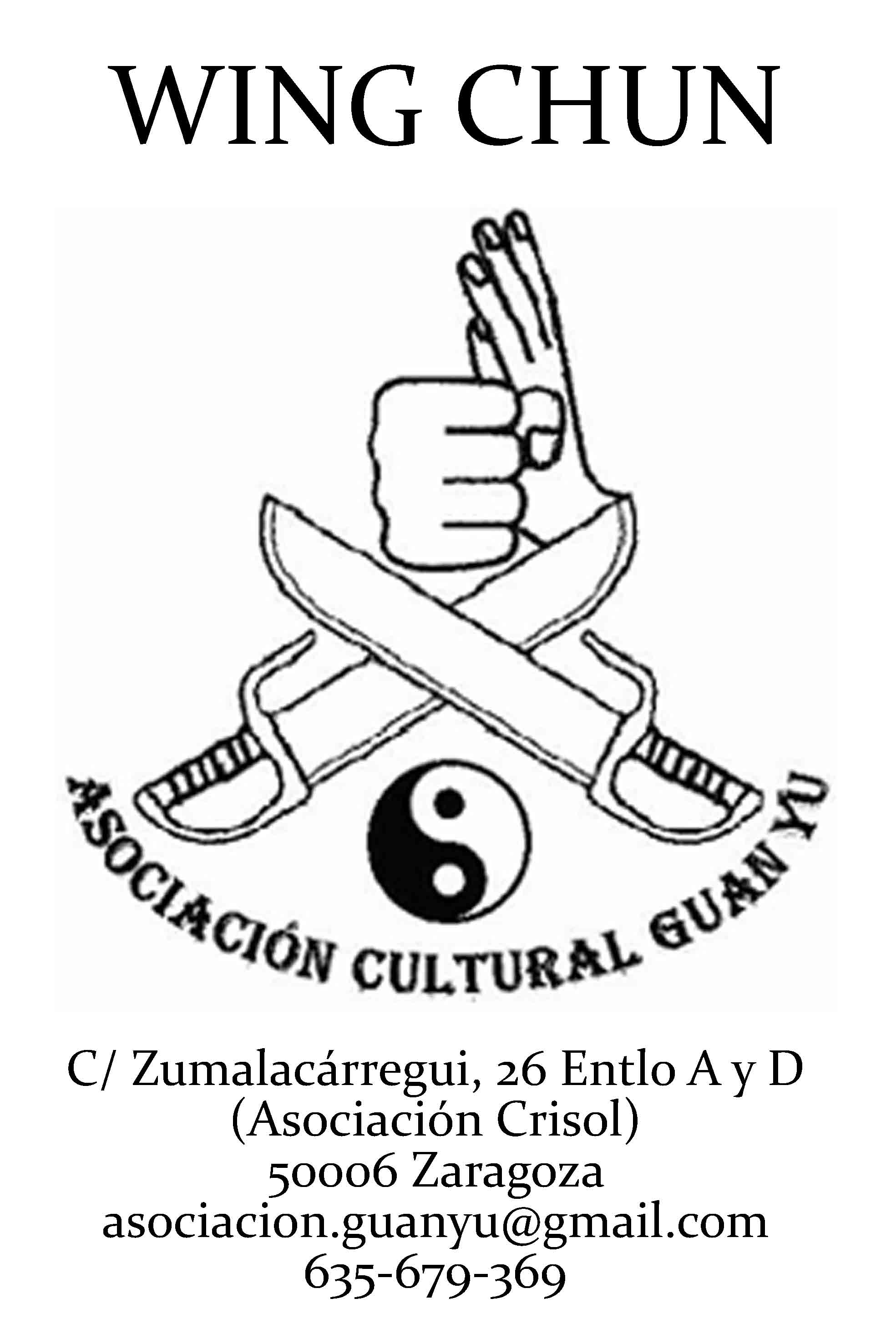 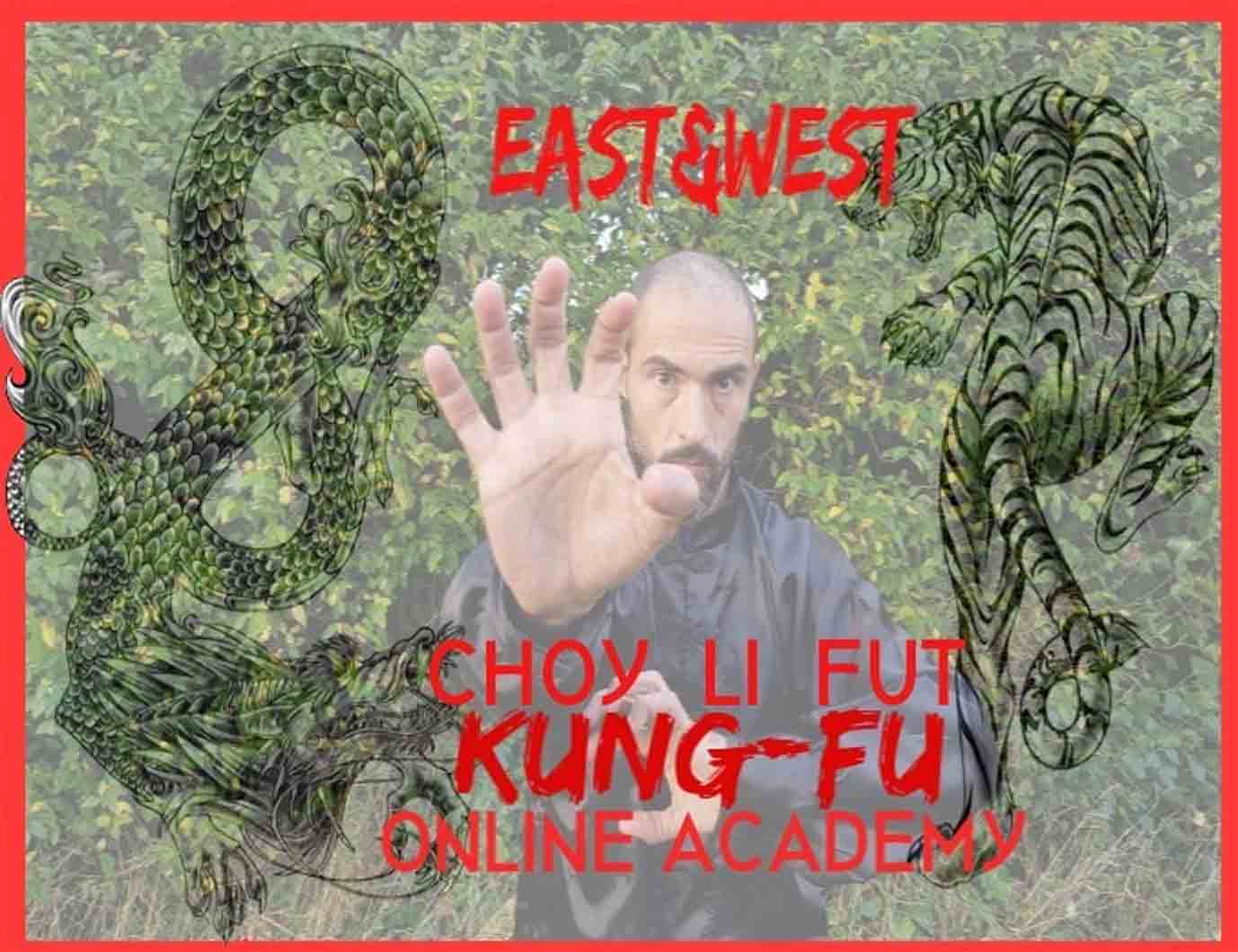